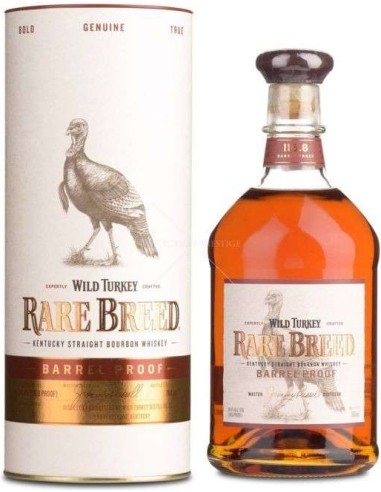 Wild Turkey Rare Breed is an American Whiskey that originated in Kentucky. Its very high alcohol content (around 54% vol.) Is offset by an incredibly smooth and soft taste, authentic and decided conferred by the very low percentage of water. In fact, as reported on the label, "barrel proof" is just to mean the absence of the addition of water to bottling. The Rare Breed has not a statement of precise age, the company describes as a mix of bourbon 6-12 years. A very special whiskey that is red amber color, with hints of vanilla, zicchero cane, leather and tobacco and a persistent finish, dry, with caramel and wood notes.

Historical American company founded in 1855 in Lawrenceburg - Kentucky, producer of Whiskey bourbon, since 2009 entirely owned by the Campari group. The production process has remained unchanged for over 160 years, with the distillates that are produced from wheat, rye and malt, all ingredients strictly NO-GMO and pure water of the Kentucky river. Quality control of raw materials is repeated four times before entering production. For the maturation of its products Wild Turkey relies on magnificent white American oak barrels, the infamous “Alligator” No.4 toasting degree (the highest available), where bourbon is able to refine for a period between 5 to 12 years. By company choice the obtained distillates are placed in the barrels when they still have a relatively low alcohol volume so that it is possible to add less water before the final bottling. All this will maintain the taste and the deep amber color transferred by the fine oak barrels. The minimino period of maturation is defined in 2 years for a "Straight" whiskey but at Wild Turkey it is preferred to play it safe, maintaining the style in force since 1890 and extending the time by at least 3 times. The last word, however, belongs to the two Master Distillers Jimmy "The Big One" (who recently celebrated 60 years of activity in the company) Russell and his son Eddie, only they in fact will give the green light to the definitive commercialization. But remember: a "Kentucky Straight Bourbon Whiskey" to be defined as such must have matured in American oak barrels at first pass for at least two years and be produced strictly in Kentucky. Here's a Wild Turkey Bourbon Whiskey, excellence and American tradition is served!