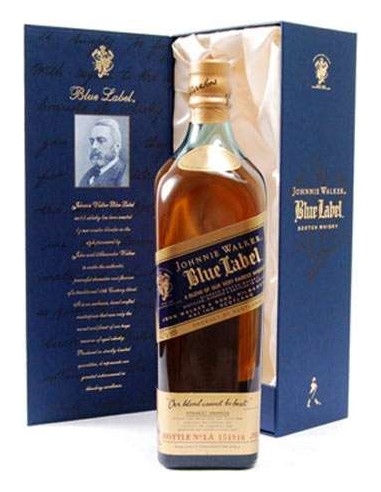 Johnnie Walker is simply one of the most famous and prestigious Scotch whiskeys in the world. Originally known as Walker's Kilmarnock Whiskey, it is the brand founded by John Jonnie Walker (1805-1857), a Scottish whiskey grocer; however, it will be the two Alexander, Johnnie's son and grandson, who produced the first quality whiskey in Kilmarnock (Scottish Lowlands) in 1865 and started his father's business into success. Among the brilliant ideas of the Johnnie Walker distillery there was the introduction of the square bottle, useful for making the most of the loading surfaces for exports and to better resist the inevitable breakages during transport. Another particular feature was the label applied with an oblique angle of 24 degrees which immediately distinguished it. The "Striding Man", the man who advances with a sure step towards the future, was instead introduced in 1908, and is still today an icon universally recognized by any connoisseur of whiskey, as well as appearing in cult films like Quella dirty, Blade Runner and on the bonnet of splendid McLaren single-seaters. Among the countless Johnnie Walker whiskeys, all characterized by different label colors, the "Platinum Label" 18 years, the "Gold Label Reserve" and the "Double Black" stand out. A historical and great production of Scotch Blended of sure quality, fruit of ancient traditions and of the noble art of mixing.