La Fèe contains all the traditional 19th century herbal ingredients used to produce absinthe, including wormwood (Artemisia absinthium), green anise, star anise, hyssop and fennel. The production involves the maceration of the plants during the distillation process, which is neither the fastest nor the cheapest way to produce absinthe, but ensures that when you pour a glass of it you will have the complete experience of absinthe as a guarantee. Many people at different times have considered absinthe a tonic tonic. Throughout history, various mixtures of alcohol and absinthe have been prescribed to cure everything from cholera to stomach problems. The first references are found in Egyptian papyruses and even in the Bible. The Roman scholar Pliny the Elder called it apsinthium in the first century AD and noted that it was usual for the champion in the chariot races to drink a cup of absinthe leaves drowned in wine that had to remind him that even glory has its bitter side. He also recommended it as an elixir of youth and as a cure for halitosis. Pythagoras prescribed the same drink to assist labor during childbirth. Hippocrates recommended it for jaundice, rheumatism, anemia and menstrual pain. In fact, the man acclaimed as the inventor of absinthe as we know it today was a French doctor called Pierre Ordendire, who in 1792, after escaping from the French Revolution, settled in Couvet, Switzerland, where he found the grass wormwood (Artemisia absinthium). Like many country doctors, he prepared his own remedies and knowing the use of absinthe in ancient times, he began to experiment. La Fèe Verte, which literally means the green fairy, was the famous nickname of absinthe, with reference to color of the drink and the spell in which it wrapped the people who consumed it. The green fairy became a well-known character in promotional poster illustrations, often popping up like a seductive genius coming from a bottle or stroking a glass of absinthe

Liqueur declared outlawed in 1915 by the French government and other countries that followed it, due to the alleged hallucinogenic effects that caused its active ingredient, the Tujone, on people. The real reason is that the wormwood became extremely popular in 1870, when the phylloxera affected and destroyed the vineyards throughout Europe and the wine was replaced with wormwood. In the early nineteenth century the leading wine producers combined their power and political influence and managed to make it illegal. Absinthe La Fée was the first traditional absinthe to be produced again in France from the 1915 prohibition period. It contains all the traditional ingredients of the 19th century recipe including wormwood (Artemisia absinthium), green anise, star anise, hyssop and fennel. The production involves the maceration of the plants during the distillation process, which is neither the fastest nor the cheapest way to produce absinthe, but ensures that when you pour a glass of it you will have the complete experience of absinthe as a guarantee. Absinthe La Fée is the only brand approved by the Absinthe Museum in Auvers-sur-Oise, France. For every La Fée production cycle, a sample is sent from the Paris distillery to the museum to ensure that the taste, the bouquet, the color and the louche (the effect of opalescence) are authentic. No other brand can boast this seal of approval. Potentell, the first commercially available absinthe, appeared in 1792, the alcoholic strength was 68 ° Vol and this became the reference grade for the nineteenth-century assenzi and today is the gradation of La Fée Parisienne. The range is currently composed not only of the classic Bohemian and Parisiennel, whose formula has been recently renewed and contains only 100% natural ingredients, also from Xs Française and Xs Suisse, produced in small quantities, the first in Pontalier in France and the second in Couvet Val-de-Travers, Switzerland, where absinthe was conceived in the 19th century. Both start as tradition dictates from an alcoholic base of wine distillate. The NV is, instead, the one with the lowest alcohol content, 38%, while the Blanche: is the latest creation by George Rowley and the master distiller, Marie-Claude Delahaye, founder and curator of the French museum of absinthe. Faithful to the recipe devised during the prohibition of absinthe, it is white to be more difficult to recognize and is also known as La bleue, due to the blue color of Artemisia leaves and the liquid itself. 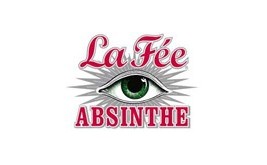