€0.40
Description
Falanghina del Sannio brut of Solopaca is born from the vinification of grapes from native grape from vineyards selected in the Sunni territory, harvested by hand in small boxes and processed with long Charmat method to enhance the varietal aromas.
Product Details
ss442

Aging of wine
3 months in bottle before marketing

When, in the year 1966, twenty-five farmers decided to set up the "Cantina Sociale di Solopaca - a limited liability cooperative society", they were set up to operate for the increase and defense of the winegrowing heritage of the "Solopaca" area and for progress economic and social agriculture.The territory of Solopaca has always been cultivated with vineyards and olive groves with a competence that has been refined over time. Here the vine finds its ideal environment in the hill and in the nature of the soil, producing a ruby ​​red wine with a delicate aroma, a clean taste, extremely pleasant and soft pastiness with an alcohol content ranging between 12 and 13 degrees. The white wine has the scent of Malvasia and a harmonious and velvety taste with an alcohol content ranging between 11.50 and 12 degrees. With the decree of the President of the Republic, published in the Official Gazette of 30-1-1974, the Solopaca wine has obtained the recognition of controlled origin (DOC). The dream of twenty-five farmers, who were joined by another 600, was realized and they finally saw the Cantina Sociale that with its grandiose complex represents a great economic reality for Solopaca and for the whole production area that extends on both sides of the river Calore. In fact, in the area of ​​"Solopaca", in addition to the land of Solopaca, fall also those of the municipalities of Castelvenere, Guardia Sanframondi, San Lorenzo Maggiore, and part of the municipalities of Cerreto Sannita, Faicchio, Frasso Telesino, Melizzano, San Lorenzello, San Salvatore Telesino and Telese.Certo it was very hard to convince the winemakers of the goodness of the cooperation and the conferment of the grapes to the Cantina Sociale and to avoid the not always human rules of the sale of the grapes that took place every year at the Maria Cristina Bridge at a price set unilaterally by the buyers This is evident from the data on the conferment of the grapes to the cooperative. In 1972 the quintals were 34,150 of grapes, in 1973 quintals 33,870, in 1974 quintals 31,920, in 1975 quintals 43,000 and in 1976 around 24,000 quintals. In short, in 1976 about 30,000 quintals of grapes went to feed the market of grapes down to the Maria Cristina Bridge. These winemakers, driven by economic needs, preferred to sell their grapes, through the brokers, to the traders because they had the opportunity to pocket the money immediately, but at a price that, on balance, was slightly higher than the average paid by the Social Cellar. The system of payment to members was made in this way: a deposit 15-20 days after the conferment of the grapes, another advance payment in May and the balance at the end of the budget.The winemaker who sold their grapes had a diffidence towards the cooperation because impregnated by centuries of individualism and above all because attracted only by the certainty and security of having their money immediately in their pocket. Naturally, over the years these fears and worries have disappeared and the winemakers have all become members of the cooperative and have convinced themselves that in this way they have the certainty of placing their products every year at an average market price. As a consequence, the market of grapes that was held every year on the right bank of the river Calore disappeared due to lack of sellers.

The Winery of Solopaca, is an Agricultural Cooperative among the oldest in Campania. With about 120 thousand hectoliters of wine produced, it is at the forefront of regional production.
The vineyards are located in a vast area which, starting from the municipality of Solopaca, involves another 16 bordering municipalities, reaching a total area of ​​about 1300 hectares. In this territory is cultivated the Solopaca DOC, first wine in the Sannio to have obtained the recognition of controlled origin (D.O.C.) in 1974. The cultivated varieties are the Falanghina, the Aglianico, typical vines of the Sannio benventano, but also Greco and Fiano. In recent years, vines linked to the tradition as Coda di Volpe and Barbera have also been rediscovered.
The Municipality of Solopaca lies at the foot of the Taburno Camposauro Regional Park, in the province of Benevento, in an area formerly known as Sannio, which has always been suited to viticulture. The fabulous "Solopaca Doc" is born on the solopachian hills, whose history is lost in the mists of time ... even Gioacchino Murat, the French general and King of Naples, who tasted the wine of Solopaca, exalted to the point of comparing the overwhelming power of wine to that of the brother-in-law Napoleone.
The grapes are harvested with traditional systems and transferred to the cellar where, after careful selection, they are vinified and bottled. The oenological plant is equipped with equipment for the vinification and bottling at the forefront and a barrel where the aging of red wines takes place. The company also has a room for autoclaves where sparkling wines and sparkling wines are produced. The structure for the storage of wines, a multi-purpose hall, and the company sales point complete the structure.
The Cellar of Solopaca offers today a wide range of wines, divided by product lines, distributed not only in Italy but also abroad, ready to satisfy the different types of consumption, from daily use to the most sophisticated catering, combining the most ancient tradition to the most modern techniques.
From the production of the winery today not only the male and seducer Rosso D.O.C., but also the full bodied and velvety Aglianico, the sparkling and delicate Amabile, the mysterious and cheerful Falanghina, up to the nobility of the aristocratic Spumante "Solopaca D.O.C." 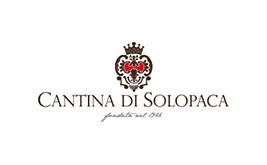 €5.00
Add to cart
Love
There are not enough products in stock
View more
Love